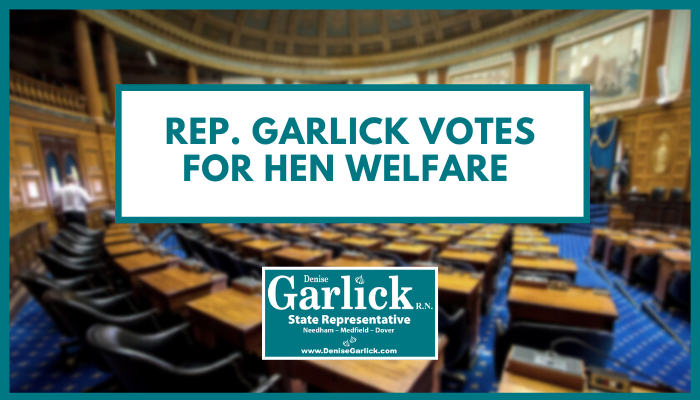 On Wednesday, October 6th, my colleagues and I in the House of Representatives voted to improve standards relative to the prevention of cruelty to farm animals. Our vote updated requirements established by a 2016 Question 3 ballot initiative.

In 2016, Massachusetts voters supported a ballot question to provide farm animals adequate space to live in a more humane setting. The Commonwealth has been a leader on treatment of animals, but since the 2016 ballot initiative, new practices are required to bring Massachusetts in compliance with national frameworks and avoid disruptions in the food supply, specifically of egg and pork products.

The legislation passed on Wednesday with a vote of 156-1, updated the definition of cage-free housing system for hens to include multi-tiered aviaries which are now widely used. Multi-tiered aviaries were not contemplated in the original 2016 ballot question but are now considered by animal welfare organizations as a healthier standard for hens, providing an expansion to the original law. In addition, the legislation now covers liquid and frozen egg products, thus extending animal welfare protections to millions of hens. The bill also extends the effective date for famers to come into compliance with the law relative to pork by one year to January 1, 2023, as only 4% of pork currently meets the standards required by law, allowing for a smooth transition without disrupting food supply.

Understanding the complex nature of agricultural production, the legislation provides the Attorney General with additional support in creating rules and regulations to establish cage-free standards in Massachusetts, allowing the inclusion of the Department of Agricultural Resources’ expertise to create the standards for the Commonwealth.

I will continue to update you on the progress of the bill as it nears the final steps of the legislative process.

Yours in service,
Denise