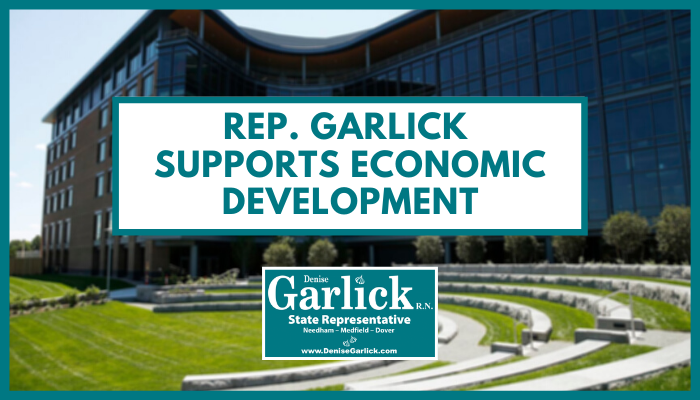 Since March, the unprecedented COVID-19 pandemic has exacerbated economic challenges and halted prosperity throughout the state. Today, nearly one in eight Massachusetts workers are unemployed and businesses continue to close their doors as the Commonwealth faces the highest unemployment rate in the country. While support from the federal government remains uncertain, I am proud that the House of Representative reaffirmed our commitment to continuing economic development and supporting individuals throughout our Commonwealth.

I recently joined my colleagues to pass An Act enabling partnerships for growth, which makes significant investments in the Commonwealth to promote economic development for all residents, support job growth in the face of significant economic challenges, and pave the way for a more equitable recovery.

First and foremost, the legislation provides for $459 million in bond funding. These programs will stimulate every corner of the Commonwealth, from MetroWest communities like ours to rural towns in Western Massachusetts. The bill directs these funds with a keen eye toward equity to ensure that every person is benefitted by the state’s recovery efforts, especially communities of color who have been hardest hit by COVID-19.

The legislation also includes various policy initiatives, notably the changes to housing laws and the creation of a framework for sports wagering in Massachusetts.

The present housing crisis is an issue that affects communities across our commonwealth. Given the economic challenges that have been exacerbated by COVID-19, residents are in need of affordable housing more than ever before. On average, rents have increased by 75 percent statewide in most communities since 2000. Today, housing costs in Massachusetts rank third in the nation.

This economic development bill includes the “Housing Choice” provision that has been a major policy goal of the Governor. A component of the bill would reduce the threshold for town meeting to approve certain zoning changes from a two-thirds majority to a simple majority. In Needham, the Planning Board and Select Board both voiced their opposition to Housing Choice, and I have amplified those concerns to the Baker Administration and to my colleagues in the House since they took that stance last year. The COVID-19 pandemic has illuminated and amplified the great needs for housing. During debate, I filed an amendment to add a level of accountability to zoning changes, namely preserving the new language for a simple majority vote of Town Meeting and adding a simple majority vote of the Select Board. Two of the three Towns that I represent have open Town meetings that can be “packed” by any single interest group- a developer or a group of like-minded residents. An elected body empowered to also be involved in the decision making would be a fair way to balance the needs of the whole community. Despite my strenuous efforts with the Baker administration the amendment was not adopted. I believe that I had offered a helpful strategy but I understand the severe shortage of housing in our Commonwealth, and the disparate impact of historical zoning laws on communities of color. My goal was to strengthen not defeat the housing initiative.  I voted for the final legislation.

The bill also initiates a system for legal sports gaming in Massachusetts, enabling the independent Massachusetts Gaming Commission to grant in-person licenses to existing casinos and racing facilities. Mobile applications and casinos will also eligible to receive mobile gaming licenses. In addition to licensing fees, the state will receive 15% of all sports betting proceeds — $50 million annually — (with an additional 1% for games played in Massachusetts going to a fund to ensure the integrity of the game). The proceeds will be distributed in the following fashion:

I continue to have concerns with increasing access to gambling. However, I am not naïve to the fact that, even as sports have slowed during the COVID-19 crisis, a robust black market continues. I supported this legislation to bring that activity into the light and, thereby, reducing ancillary crimes and protecting the Commonwealth’s investments in the gaming industry and the high technology software design innovation sector.

Keeping in mind the importance of arts and culture, the House of Representatives prioritized key provisions in this legislation by:

With the affirmative vote of the House of Representatives, the bill is now in conference committee to be reconciled before advancing to the Governor’s desk.