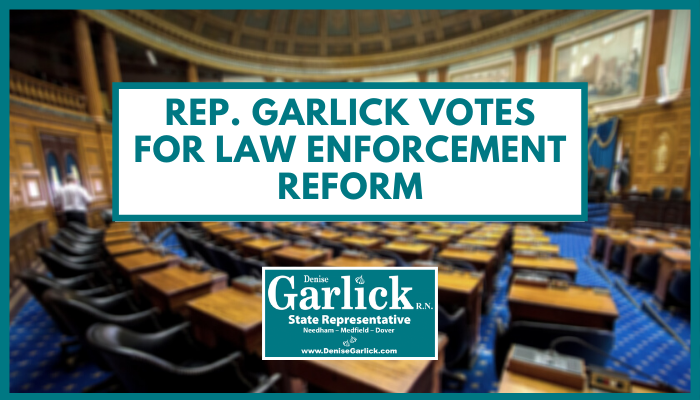 I write to provide you with an important update on racial equity efforts in the State House. As your State Representative, I have just voted in the affirmative on the conference committee report, An Act relative to justice, equity and accountability in law enforcement in the Commonwealth, which makes significant structural reforms to policing in Massachusetts by implementing changes to training, establishing certification of law enforcement officers, and providing for continued assessment of the role of race in our state institutions.

This comes after an intense debate following the tragic deaths of Breonna Taylor, George Floyd, Ahmaud Arbery, and countless others, as our community, Commonwealth and nation, overcome with anger, grief, and horror, united to pull back the curtain and shed light on a broken system that does not equally serve all residents. Led in the House by the Black and Latino Legislative Caucus Chair Rep. Carlos Gonzalez, and shepherded by Judiciary Chair Rep. Claire Cronin, the House of Representatives took swift action to reaffirm the commitment to all who call the Commonwealth ‘home.’

The core tenets of the bill I voted for in July are present in this conference committee report, which incorporates the four priorities of the Massachusetts Black and Latino Legislative Caucus through the following provisions:

Use of Force and Duty to Intervene. Directly related to the unnecessary murder of George Floyd, this legislation requires de-escalation tactics to be exhausted before any use of physical or deadly force may be used by an officer. The bill places a ban on chokeholds and other restraints known to cause injury, as well as places restrictions and accountability measures on the use of tear gas and rubber pellets. In addition, the bill creates a statutory duty that an officer intervene if he or she witnesses an officer using excessive force and report to his or her direct supervisor.

Investigation of Structural Racism. Creates three special commissions to study the presence of institutional racism in correctional facilities, the parole process, and probation services. Together, the three commissions will make recommendations to eliminate any disparities in the treatment of persons of color in the criminal justice system.

The legislation also limits the use of facial recognition technology and biometric surveillance by public agencies, prohibits the use of no-knock warrants unless a warrant is issued by a justice of the superior court, develops an in-service training for School Resource Officers, allows public access to law enforcement misconduct records, and requires training for law enforcement officers to appropriately interact with persons with intellectual and developmental disabilities and substance misuse disorder. Recognizing the complexity of qualified immunity, the legislation implements an immediate policy to prohibit a decertified law enforcement officer from claiming immunity in civil liability, and creates a special commission tasked with more broadly studying the impact of current qualified immunity provisions.

Some may say this bill goes too far and some may say it does not go far enough. The conference committee did not include every provision I supported in the House, nor does it include everything that was voted for in the Senate. I believe that this is a time when action is necessary. Quite frankly, more actions are needed and I will continue in my work for our community and Commonwealth to be inclusive, fair and equitable in law enforcement and in all our “policies, procedures, unspoken norms and routines that push people into different paths of opportunity where some individuals have greater access and less, due to race.” (Laura Morgan U. Virginia).

It is my hope that the Governor will swiftly sign this legislation into law. Once signed, Massachusetts will be a leader in the nation in addressing racial equity in law enforcement.

May you and your loved ones and everyone be well and be safe.

Click here for a full summary of the legislation.