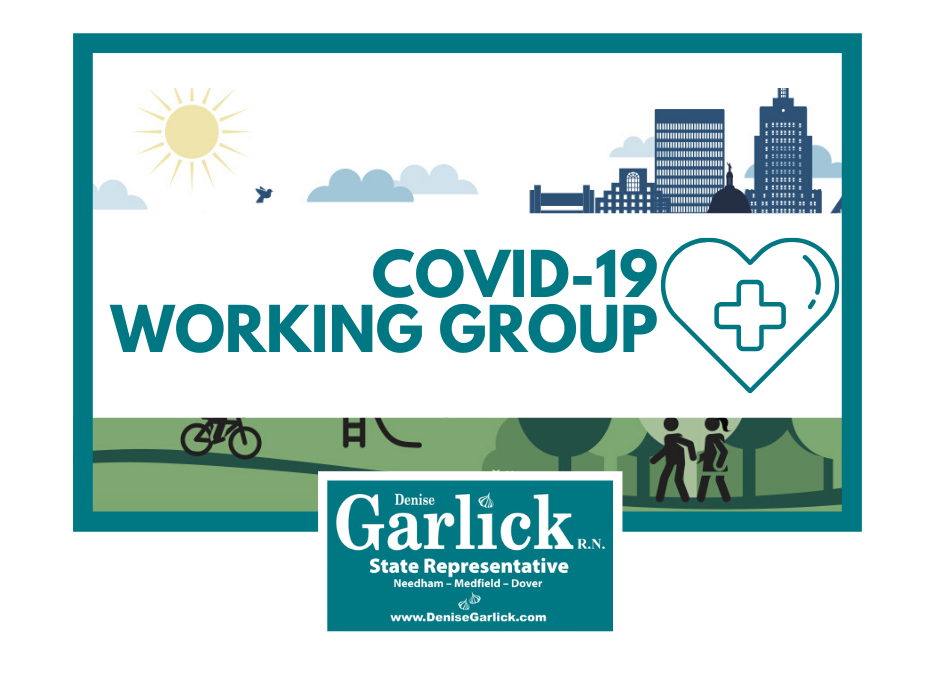 Working on behalf of the residents of Needham, Dover and Medfield and all the people of our Commonwealth, I welcome the opportunity to serve with my colleagues on Speaker DeLeo’s COVID-19 working group. The Speaker’s immediate response to COVID-19 in establishing the working group and it’s mission is a model of leadership in these days of unprecedented issues and concerns. The House of Representatives is strong and continues our work for the people of Massachusetts.

Please read the article below.

MARCH 16, 2020…..The Massachusetts House is turning to a group of representatives with emergency response, public health, and nursing and medical backgrounds to provide leadership during the coronavirus crisis.

Working groups are taking shape in both the House and Senate as the Legislature searches for ways to take up bills at a time when the governor has largely banned group gatherings of more than 25 people. There are 40 seats in the Senate and 160 in the House, and the branches have been operating with limited attendance.

Rep. Jon Santiago of Boston, a captain in the U.S. Army Reserve and emergency room doctor in the city, is among five members of a working group announced last week to help guide the House and its deliberations.

Rep. William Driscoll of Milton, a Boston College graduate who describes himself on Twitter as a “seasoned disaster responder turned politician,” is also on the group, as well as the current and former House chairs of the Legislature’s Public Health Committee, Reps. John Mahoney of Worcester and Kate Hogan of Stow.

“The legislature & our colleagues in government weigh major far reaching decisions on the regular,” Driscoll tweeted late Sunday night. “We are prepared to do our part to find solutions as the situation evolves.”

He was responding to House Ways and Means Committee Chairman Rep. Aaron Michlewitz of Boston’s North End, who expressed on Twitter that the House is “prepared to help find solutions working with our colleagues in government that will help mitigate the economic damage to our communities and our constituents.”

The final member is Rep. Denise Garlick of Needham, a registered nurse and vice chair of the Ways and Means Committee. She was previously chairwoman of the Mental Health and Substance Abuse Committee, as well as the Legislature’s Elder Affairs Committee and also previously chaired the Needham Board of Health.

On Saturday, the News Service reported about Santiago’s efforts on Twitter to draw from his work as an emergency room doctor at Boston Medical Center and offer regular social media updates on what he is seeing at one of the region’s busiest hospitals during the outbreak.

“You have a role to play in stopping the #coronavirus #covid19 epidemic from worsening. PRACTICE social distancing. Let’s all come together and play our parts. See you in the morning!” Santiago tweeted late Sunday night.

Driscoll, who has been active on Twitter during the state of emergency (@BillDriscollJr) wrote on Saturday, “The #GreatestGeneration was asked to go to war. We are being asked to stay at home. Staying at home & limiting physical interaction with others may save members of Greatest Generation, vulnerable people & it may save you.”

From 2012 until 2017, Driscoll was executive director of NECHAMA – Jewish Response to Disaster, a voluntary organization that provides natural disaster preparedness, response, and recovery services nationwide. Before that he was interim president and CEO of National Voluntary Organizations Active in Disaster and U.S. operations director for All Hands and Hearts – Smart Response. According to his LinkedIn page, he founded Persevere Disaster Relief in 2006 and led its Hurricane Katrina Project along the Gulf Coast of Mississippi.

The House is working on plans to begin livestreaming its lightly attended informal sessions, and a Senate aide told the News Service Monday morning that the Senate plans to livestream its session on Monday.

“The working group assesses and provides advice on the internal processes and procedures on the ongoing operations of House business, including formal and informal sessions, as the House confronts the COVID-19 pandemic,” Catherine Williams, a spokeswoman for House Speaker Robert DeLeo, said in a statement to the News Service on Saturday. “This group will not supplant the work of the subject matter committees to address the effects of the coronavirus on the Commonwealth as a whole. The members of the working group have had productive meetings throughout the week and weekend and continue to keep in contact remotely daily as the outbreak unfolds.”

In a Tuesday, March 10 memo to House members and staff, a DeLeo aide announced the House was canceling all public events “for the foreseeable future” and that DeLeo would create the working group to evaluate operations, including committee hearing schedules and formal legislative sessions.

On Wednesday, March 11, Senate President Karen Spilka sent an email to all senators and staffers implementing many of the same preventative measures the House had put in place: canceling or postponing all Senate public events for the next 30 days, asking senators not to schedule tours of the State House, and urging that all meetings be converted to conference calls or virtual meetings.

Spilka also told senators who chair committees that they should be in touch with their House counterparts “to discuss the potential of postponing public hearings, or converting them to a format where it is possible to take measures that ensure the ability for public input and online testimony.”

Sen. Jo Comerford of Northampton, the Senate chair of the Public Health Committee, has been tapped to lead an internal group of senators to “advise the body on how it should approach the various challenges posed by this evolving epidemic, including any legislation that may be needed,” the president said.

Comerford (@Jo_Comerford) previously worked as director of programs at The Food Bank of Western Massachusetts and led the National Priorities Project, a national budget and tax priorities research organization, as its executive director.

Other senators on that group include Eric Lesser of East Longmeadow, Cynthia Friedman of Arlington, Cindy Creem of Newton, Bruce Tarr of Gloucester, Will Brownsberger of Belmont, Jason Lewis of Winchester and Julian Cyr of Truro.